About the author Richard Small

A very brief insight.
A man whose blood flows with the instinctive ancestral memories of
Devon and Cornwall.
Retired Firefighter of over twenty five years service, forty five years of martial arts training, currently teaching Aikido weapons and Tai Chi. Travelled widely and many times to both China and Russia. Keen walker of wild places and seeker of ancestors and adventures. Thinker of the alternatives in life, a questioner, some say sceptic, a philosopher who has studied the healing arts. A man who opens doors for others . . .  so, why wait out there in the cold?

Most of all, he would like you to read his stories and
enjoy them in your own way.
***

Delving deeper
His perception of life and self meant that like many others he was driven by a need to prove himself adequate in life. In pursuit of worthiness and seeking to be valued in life he engaged in activities like pot holing and extreme walks like the 40 miles of the Lyke Wake, climbed Ben Nevis, Snowdon, Helvellyn, he took up martial arts, eventually being awarded 4th Dan black belt in Aikido. In an often failing attempt to improve his lot and that of his family and justify his otherwise low self esteem, he sought qualifications, enough to wallpaper a small room . . . Post Grad Diploma in Training, UK Fire Engineering Diploma, Graduate of the Institution of Fire Engineers for over 30 years and was for several years a
Chartered Member of the Institute of Personnel and Development.
Qualified in chemistry and a signatory to the Official Secrets Act and
lots more he cannot tell !

The undying struggle for knowledge and skills led to an even greater desire to share the same and to make life easier for those following.
Richard held instructor qualifications in further and adult education, RYA power boat and first aid instructor, within the fire service he was a Breathing Apparatus and a Road Traffic Accident instructor and Radiation and Hazmat officer.
​He became a qualified coach in the Chinese art of Tai Chi  and
​in the Japanese art of aikido.

He spends a good measure of his time writing short stories, assisting other writers and contributing to various publications, practising his martial arts and walking in the beautiful countryside of Devon and Cornwall. No stranger to the alternative therapies like Reiki nor to meditation and Chi Kung, blood donor, Greenpeace supporter, gardens dug, bodies buried and pianos moved and  all round not a bad bloke at all (so he says).
He philosophically offers you these short tales of the supernatural.

Are they fiction or are they true?
When late one dark evening you find an old lady in Victorian garb standing in your hallway and deep within, you just know she has been dead for a hundred and forty years or so, it does make you think . . . it did him!
**
Richard’s fascinating and often challenging life provides the alchemy for this latest collection of short stories, and through sharing his own unique brand of philosophy, caution and humour, these stories offer the reader a chance to open up long-hidden doorways to other worlds, other times and other places.  Written with great respect and goodwill, these tales are heavily influenced by the travails of Richard’s life in the fire service, and his growing appreciation of a broader view through the practice of martial arts.
***
We are inevitably coloured by the dust of the road we travel
and sometimes, we cannot brush it off.

***
Richard J Small was born at the site of the old Workhouse in the industrial town of Bedford. In later life he discovered it was also the place in which his great, great, grandfather had died a pauper in 1885.His background is of  a Victorian terraced house with a small sunless concrete yard for a garden, a house in which water came from a solitary cold tap and heat from a solitary coal fire.
Those were the days in which many of the 1840’s street slums were being demolished for future development, and when vegetables, coal and milk were still sold door to door from a horse and cart. He attended the same schools as did his grandmother before him, and with the exception of one truly brilliant English teacher, Richard’s education was all it needed to be for the factory fodder so many were destined to become.
***
Despite such a previous poor education,
two of his earlier works were nominated for the
Sunday Times EFG Short Story Award
***
​
Observations by readers.

There is an energy that comes with the stories that really does transport you to another place.  You, my friend, have a wonderful gift, one that is very rare in a writer, to create not only a picture of the place or event, but everything else - the feelings, the energy, the atmosphere.   Your gift now needs to be acknowledged by the media and the only way that can be done is if they are made aware of it.  These words are not just being kind to you but the truth as we see it." Terry.
**
In times so full of falsehood and sensationalism, Richard Small’s collection of short stories breathes a welcome change that is undeniably honest and true.  It is rare indeed to find an author prepared to be so soulful and generous with his own life, whilst telling a tale with such purpose and intent.  These stories, told with much candour and openheartedness, draw us in and invite us to walk a journey of hope, discovery and enlightenment.  Within each one is a pearl, and our task as readers is to find that pearl, capture it and become the richer because of it. Richard generously shares with us his hard earned wisdom in words that not only entertain but also hold the key to many of life’s mysteries.  Every time I re-read them, I find something new, and that is a precious gift indeed!  Mya Gleny
**
The Maroon . . . a lifeboat story;    ".... which I read the other day. It's good stuff; crisply written and very moving. It undoubtedly sums up the sense of valour and commitment at the heart of this noble organisation."
Paul Boissier Chief Exec RNLI
**
“The ‘Victorian Fireman’s Axe’ and ‘The Maroon’ are tales of courage and guts told in a way that shows raw human spirit. There is no room for pretence. In all the stories the author seeks to portray the good in human beings. Where he finds falsehood or social injustice he exposes it with satire or humour. His stories are meant to make the reader think of the deeper meaning in life.”  A.A.
**
No stranger to the quick or the dead, Richard Small travels to many a strange place in the quiet recesses of his mind…   If you allow it, and are willing to take the journey - you may find him an interesting travelling companion.
The essence of these short tales will call to you, stirring your very Soul from its slumbers.  They may even open up long hidden doorways in your own mind, and will surely touch the deepest corners of your heart.
These tales were written with much respect and goodwill.  They are imbued with adventure, philosophy and caution.  They might light the lamps in the hallowed hallway where your own soul walks, and, like beautiful music, carry you through to another time and space.
These stories have been deeply influenced by the Author’s own life, both as a fire-fighter and martial artist.  A modern day thinker and philosopher, Richard Small is a seeker of spiritual answers, born out of the loves and losses of his own life and family.
Penny
**

Philosophy of the author

No one is truly lost, that finds themselves.

Time will decide when our journey is over but
we decided how far we travelled.

Just as the candle's aura illuminates the darkness,
so stories light the way for a soul lost in the mists.
Both the light and the words are reaching out for you.

Beyond the Spirit Seas and Mountains, the answer sleeps;
Put one foot in front of the other and go and wake it up.

While in the footsteps of ancestors, look for a sign -
if there'll be one, it will come from within -
for they live there still.

Journey into the dark so that the inner light may be seen.

​They say your eyes are the windows of the soul . . . but it's not just a one way street, so let your soul look through and see a new world . . . don't keep it in the dark, draw back the metaphorical curtains and have a read. 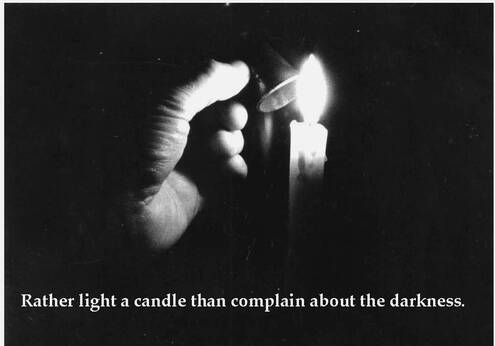