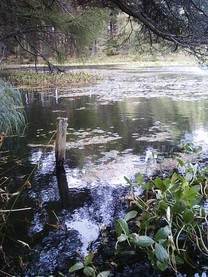 There was definitely someone standing alone on the bank on the other side of the lake.    Alone, myself, I glanced across as I walked along the footpath towards the wood.  I didn't like to look face on to this person, in case they wanted not to be noticed, but out of the corner of my eye, I could see dark clothing on the body, but the arms hanging at her sides, and her legs below the knee were whiter, as if bare.  The face and neck also showed pale, and the hair was dark.    There was enough evening light for me to pick out this person, this woman, as she stood there, staring across – was it at me?  I hoped not, it wasn't anyone I recognised, and I hurried on, but the hairs on my arms tingled, and a feeling of unease coming over me.   If she had moved, walked along the path, swinging her arms, looking as if she was out for a walk, I wouldn't have given her another thought, but to be just standing there, motionless, watching me – that wasn't right.   I decided not to look back as I walked on, quickening my pace a little, so as to get nearer my goal, the end of the lake where it tapered into a stream, and ran downhill in little waterfalls to join the river half a mile away.

I often took this route in the late afternoon, to walk off the day's work, clear my head of all the decisions, the targets to be reached, the directives from head-office, and grumbles from the staff.   The walk usually refreshed me, and helped me to sort out a few of those problems, but this time I couldn't get that figure across the lake out of my mind, and as I reached the little bridge over the stream, I looked again to where she was.   Or had been.  There was no one there now, no sign of her, and I began to wonder if she had gone back, or whether she had followed my direction and was closer to me.  What if she was there, behind the trees, watching me again?    I strained my eyes and ears, in case I could pick out movement on that side of the lake.  But I was puzzled. Thinking about it, I realised that there wasn't actually any access to that side of the lake, only the path I took from the main road above.   One would have to pass through a tangle of brambles and rough ground to get to where she was, so how did she get there without my seeing her somewhere along my way?     I must calm down.

Perhaps I had imagined her, and looking around, I could see no one.  But I was certain I had seen someone; in my mind's eye, I recalled the dark hair, the bare limbs, and the white face.  I didn't believe in ghosts, but shivered at the thought. Enough!    I really ought to turn back and go home; the sun had gone down, leaving pink and grey streaks in the sky, and the gaps between the trees were darker now and rather threatening.

Turning back from the bridge, I started on my way back, to the road.   And there she was, standing between me and the end of the footpath.   She was still a distance away, black and white in the dusky light, motionless, watching.   I stopped, trapped, unable to progress, fearful and confused.    Panicking, I looked around to see if there was another route to get away from this awful place, but the shrubby trees along the path were too close together, and the dark water of the lake beside me gave no comfort.   I had no alternative, if I was to get home at all that evening, but to walk slowly towards her.   I took some deep breaths to give myself courage, and called out to her, but there was no reply, just that blank stare which seemed to penetrate my soul.   I moved forward, and as I did so, so she moved away from me, somehow drifting backwards without effort.  I didn't seem to get any nearer to her.   I tried walking faster, and the same thing happened, and this continued until we were nearer the end of the path, where it turned upwards towards the road.  And at that bend in the path, she disappeared.   I desperately wanted to see her again, to find out where she had gone, and hurried towards the place where I last saw her.  Nothing.   Not a sign of anyone, I was completely alone.  I realised I was shivering, partly due to the coolness that had descended since I set out, and partly due to the eerie feelings that had haunted me -  why did I use the word 'haunt'?   Perhaps I had seen a ghost.  Nonsense.  But what?

Home called, and I wasted no more time getting there.


A few weeks later, picking up my local newspaper as it fell from the letterbox, I noticed a side-heading on the front page.   It seemed that a woman had committed suicide by walking into a lake, the very one where I had taken my walk.   Reading on, I saw that she must have done this in the early morning of my strange sighting; but there was more – she was named.   I knew that name.   She and I had been at school together, were close friends as teenagers, but had grown apart, gone our own ways and lost contact.   I had not recognised her across the water, but she had recognised me.   Tears filled my eyes as I realised it was me she was calling to, silently, on that fateful evening. 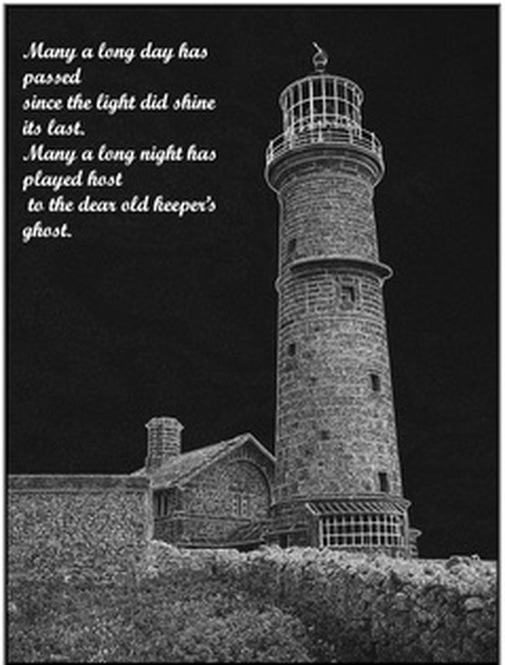